The pitiful emperor of the Erebonian Empire like an angel. He is a good friend with Elysée, and he and his twin brother, Prince Sedlik, are called "the treasure of the empire".

[Backing of the Red Wing]

Become the backing of "Red Wing" Carrejas, and provide legitimacy for the activities of class VII members as a member of the royal family of Yanor.

There seems to be a certain degree of understanding and knowledge about the "Hobby of Tanmei Route" that has also been popular in women's academies.

Received a special magic wand mixed with the blood of the Yanor family from Prince Olivet, and faced the change with Li En and others.

The emperor of the Erebonian Empire who has a high popularity among the people. He has a close relationship with "Old Class VII" and supports Li En.

She worries more than anyone about her younger brother Saidlik, who has been close to Prime Minister Osborne since last summer and has a radically changed personality.

People around try to win over Li En, who is close to the royal family. In order to change their movements, she deliberately dances with Li En after Elysées.

The emperor of the Erebonian Empire who has a high popularity among the people. He has a close relationship with "Old Class VII" and supports Li En.

Alfin and Li En went to his brother's hometown together, held his relic, Lute, and presented the song "Amber Love." Prepared to face the consciousness of his younger brother Seidlik.

[Pray for father to recover]

Although I wanted to stay by my father's side in my mood, there was something that I had to accomplish as an emperor and watched my mother leave.

The emperor of the Erebonian Empire who has a high popularity among the people. Enrolled in Women's College. Has an indissoluble bond with the old and new class Ⅶ, and the relationship is very close.

He appeared in front of Tita who was about to be tested by Dr. Erica, and offered her assistance. Faced with the surprised Tita, she said that she is helping as a friend who overcomes the suffering together. 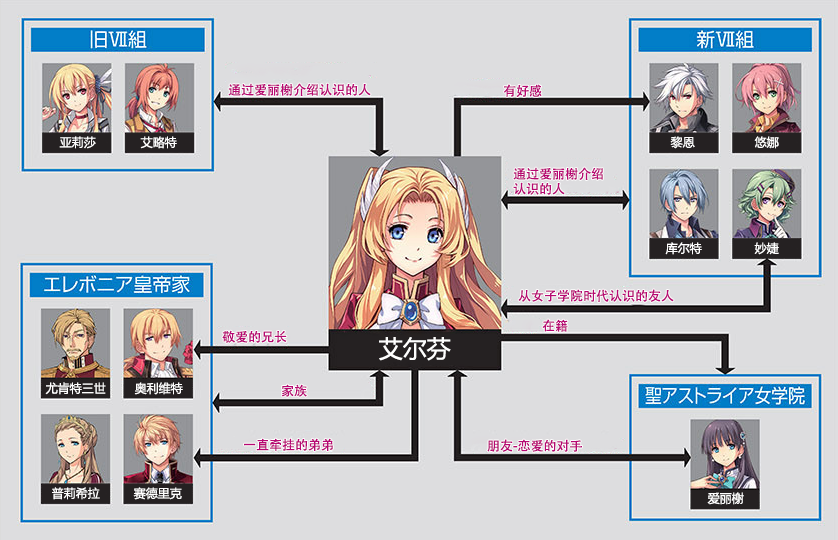