A-class guerrilla of the Imperial Branch of the Guerrillas Association, former member of the "Northern Jager" regiment

"It's okay for me to help push a few as a "handsome sister"." 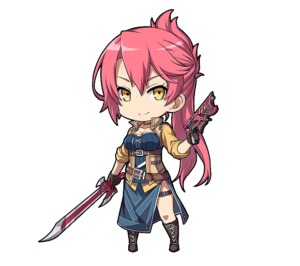 The instructor is responsible for martial arts and actual combat skills

Served as the instructor and martial arts instructor of class Ⅶ. In private life, there is also an uncomfortable side, and sometimes even start drinking beer in broad daylight.

She seems to be old acquaintances with the exchange shop owner, Michelet, and they both know each other's unspeakable concealment.

In the past, he was an A-level guerrilla called "Purple Light Barrestan", which belonged to the association branch of the imperial capital.

[Comrades-in-arms] Every time the death day of "comrades-in-arms", it seems a little sad. Although that doesn't seem to happen when she was a guerrilla...

The instructor is responsible for martial arts and actual combat skills

The female instructor who serves as the instructor of class Ⅶ. Originally an A-rank guerrilla with the name of "Purple Lights", his strength is outstanding even in the empire.

The reason why he likes to drink is said to be to imitate the "uncle" who was taken care of by him in the past.

Until 6 years ago, he was still in his hometown Northumbria Autonomous Prefecture to participate in the hunting regiment "Northern Hunting." After being rescued by Beatrice instructor, he became a guerrilla.

In order to rebuild the empire's Guerrilla Association, he resigned as an instructor and returned to the ranks of guerrillas after 2 years.

The former instructor of the Military Academy’s headquarter, an A-level guerrilla known by the name of "Purple Light". From Northumbria. In the past, it belonged to "The Hunting Soldiers of the North".

[Adoptive father of the hunter]

The adoptive father who had led "The Hunter of the North" asked Sarah to rethink the way forward before he died. Let her decide to become a guerrilla earning a legitimate income.

[The Will of the Late Colonel]

To prevent the former "Northern Hunters" who were taken away from their hometowns from committing suicide, and asking them to carry out the "lie" that Colonel Barrestan and others have been preaching.

The former instructor of the Military Academy’s headquarter, an A-level guerrilla known by the name of "Purple Light". From Northumbria, it used to belong to "The Hunter of the North".

Go to the grave of the adoptive father Colonel Barrestan to worship with the northern hunters and the members of Niederhogg. Praying for victory with the hunters, Sarah also renewed her energy.

In order to compete with Sharon, Sarah planned a drinking competition, but lost in the preliminaries.
It seems that drinking and wine tycoons cannot be regarded as the same.

In the face of the final conflict, Sarah told the old and new classes what the instructor should say. Although the ending is not very handsome, it fully expresses her inner thoughts.

Previously served as instructor in the old "Class VII" such as Li En. The A-level guerrillas with the alias of "Purple Light" are quite strong.

A war orphan from Northumbria Autonomous Prefecture, he was raised by Colonel Barrestan who founded the hunting regiment "Northern Hunter".

When she is not talking, she is a beautiful woman, but the wine is not good, and her private life is quite sloppy, which is a flaw in the beauty.

After the disaster came to the empire, he officially resumed his activities as a guerrilla, and cooperated with the Closbell branch and the younger guerrillas that restarted with independence again, and actively executed various orders in various places in Semelia.

[Ep: Memories with my father]

In the face of Kleia, who was full of distress, Sarah told her about her father's view of herself as an orphan, and let her understand the meaning of "family".

Seeing a major situation, she contacted the headquarters of the association and confirmed the status of cooperation between the guerrillas. At the same time, I did not forget to confirm the equipment before the start of the operation.