Instructor of Military Studies at Tolz No. 2 Campus, former member of the "Red Constellation" of the Jager Regiment

"Guys who can still find light on the road of suffering-I have seen a lot in the empire."

Randy originally belonged to the Crossbell Guard, where he used his usual axe and gun as a weapon. The ability to use a rifle in the garrison is essential, but Randy refuses to use it because of something that happened in the past. After being dismissed by the then commander, Sonia, who was still the deputy commander at the time, became a member of the Special Mission Support Section.

His real name is Randolph, he was the captain of the [Red Constellation] of the Hunting Corps, and was known as [Son of the God of Fighting] and [Red Death]. Father Badr is the strongest hunter, known as the [God of Fighting]. As his son, everyone has been expecting Randy to become his successor, but in the end Randy bid farewell to his past in the Big Tree of Bizhi. After that, Krossberg was occupied by the Erebonian Empire, and he joined the resistance movement in order to liberate Krossberg.

[Reliable big brother who is good at taking care of people]

He is the eldest in the support section, playing the role of the eldest brother to help his companions. He is frivolous and likes to go out to play at night, but he is honest, good at taking care of others, and always protects his companions without a trace. He also showed a gentlemanly demeanor to Ellie and Tio and took good care of them. In addition, he has been secretly watching Lloyd, who is chasing Guy's footsteps.

In the hunting regiment, Randy has eliminated many enemies since he was a child, but after his friend died in a mission, he began to feel confused about his destined life as the regiment leader and fled from the hunting regiment. Since then, he has sealed up the rifle, a weapon of the age of hunting soldiers.

Later, when the red constellation appeared in Clos Bell, he learned of his father's death from his uncle Sigmund, who also forced him to inherit his father's position. Randy deeply realized that as the son of the god of war, he had not fully transformed into Shura, and had spent a half-way career in combat. In order to sever this karma, Randy lifted the seal of the rifle and made up his mind to resist fate and choose his own life. In the end, he overcame the barrier of Sigmund and showed his consciousness.

A male instructor with a casual and calm personality, sent from the Imperial Army Crossbel front team. Used to be the Crossbell police officer.

The two people who were separated because of each other's stances drank and chatted together, and after getting closer, they became partners who called each other "Li En" and "Randy."

[An appointment with rum]

Although the things they want to protect are different, Li En and Randy, who have the same ambitions, have become "friends" in addition to being colleagues.

A male instructor sent from the Imperial Army Crossbel's front team with a casual and calm personality. Formerly affiliated with the Special Agent Support Division.

Together with Rosalia, they carried out devil training on Yuna and others who had regressed physically, pushing them to the limit, and supporting the resurrection of Class VII instead of Li En.

And Mi Leiyou, a former colleague of the garrison, is a congenial partner. Although it is categorically concluded that it is impossible for the two to communicate, there seems to be a fetter different from the support class.

He once belonged to the "Red Constellation" of the Hunting Corps and the "Secret Service Support Section" of the Crossbell Police, and looks like a reliable eldest brother to others.

After Clos Bell was captured, the first governor Lufas El Barrea deliberately transferred him away from his partner and went to the second branch of Tolz as an instructor, but he also accumulated experience as an instructor in the empire. , And established a deep bond with everyone headed by the old and new "Class VII".

After Crossbell's re-independence became a foregone conclusion, Randy's tenure of instructors happened to come to an end, so he set off to return home.

Although he was still a little bit reluctant to promote the underachievers at the branch school, he decided to return to Clos Bell to re-start the activities of the "Secret Service Support Section".

After finishing his tenure at the second campus, Randy returned to the support class. Although he is happy to return to his former unit, Tolz is also an important place for him.

[Reunion on the mountain road]

Randy arrived when Lloyd was fighting the Black Guard. Although stunned at the enemy, at the same time he was relieved that Lloyd and others were safe.

Randy was angry at his futility. Although once made up his mind to let his hands be stained with blood again, after listening to Lloyd's words, he decided to implement his own style. 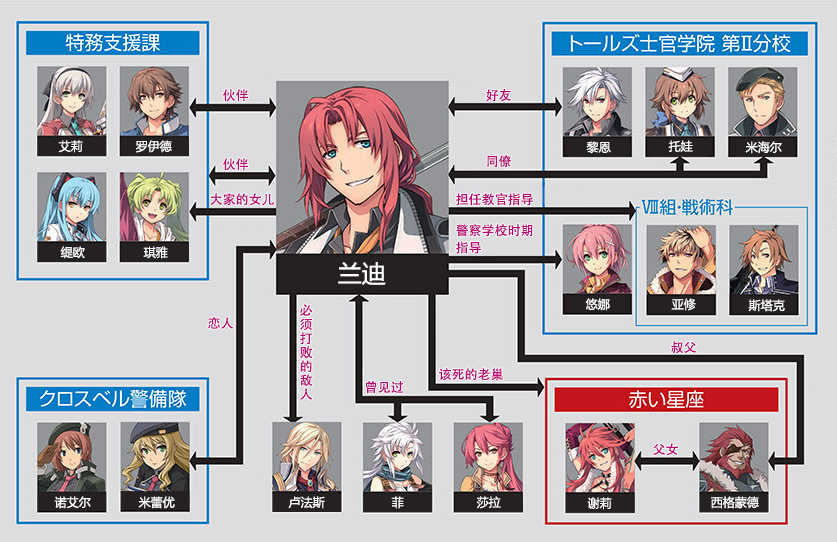