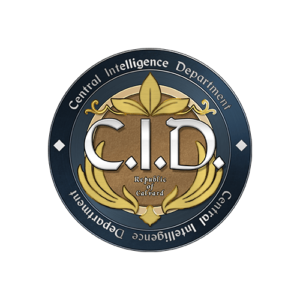 In cooperation with the Presidential Palace, intelligence agencies operating in the Karvard Republic and at home and abroad.

After a two-year test operation, sufficient talents were recruited from various organizations and the system was restructured into "CID (Central Intelligence Department)" and was formally established.

At present, after the new President Granhart took office, the CID was divided into three "bureaus" and reorganized into a dictatorship in which the president had mastered and controlled all intelligence. However, in this situation, in order to contact the divided provinces A department called the "Comprehensive Analysis Room" was established within each department. Under the direction of the new president, Wuxiang Loulan, who assisted in the establishment of CID, was in charge.